One of the most challenging elements to examine in a monitor is its response time. Because it is one of the most undervalued elements, as it does not provide much value to the common user.

The simple answer to ‘what does monitor response time mean’ is the time it takes for the colors you see on your display to move from one to the next is referred to as response time.

In this article, we have assembled all the information on what does monitor response time mean, types of response time, and some questions you may ask!

For those looking for a gaming monitor or those who work in industries that rely heavily on videos or other motion-dependent things, response speed is critical. It can have a considerable impact on a monitor’s performance.

What Is the Response Time of a Computer Monitor?

Monitor’s response time meaning is the time it takes for a monitor to move from one color to another is known as reaction time. This is commonly expressed in millisecond, which is the time it takes to go from black to white and back to black in one millisecond. Gray-to-gray (GtG) and, on rare occasions, black-to-white (BtW) conversions are also possible.

The average time for a transition from black to white to black is 10 milliseconds. LCD displays, on the other hand, have a response of less than 10ms, as a point of comparison. The response time in milliseconds is shorter the better the image and motion output is.

Some panel types, on the other hand, are much more reactive than others, with TN panels being much more sensitive than IPS panels, for example. All of that, however, is changing, especially with the arrival of nanoIPS.

What is your Motivation for Requiring a Quick Response Time?

The number of computer users are unaware of their monitor’s or screen’s reaction time since, for most part, it makes no difference. The delay between your display changing colors whether you’re surfing the web, sending an email or Word doc, or editing photographs is so brief that you probably won’t notice it. When video is presented on today’s computer screens and televisions, there is usually no discernible delay for the viewer.

The gaming sector is an exception, and the gaming monitor response time is the most important factor for e-gamers. In a fighting game, even the slightest amount of time can make a big difference. A single millisecond can spell the difference between winning and losing a fight, shooting an effective long-range sniper shot, or getting the perfect line in a racing game. As a result, a low response time of 1 to 5 millisecond is well worth the cost in a pricier, gaming-specific display for gamers looking for a competitive advantage.

What Kinds of Monitors Have the Fastest Response Times?

When it comes to a rapid response time on your laptop or phone screen, you usually don’t have a choice, but there are some exceptions. If you’re buying a new monitor for your desktop computer, on the other hand, you’ll want to acquire the most capable panel you can afford.

There are three primary varieties of LCD panels available, which account for 99 percent of all screens on the market today.

Although TN (Twisted Nematic) screen panels are affordable, they often have a narrow color spectrum. These game monitors are among the fastest on the market in terms of response time, and gaming monitors usually use less colorful TN panels in attempt to be faster.

IPS monitors, which are much more expensive and feature more realistic colors, are preferred by graphic artists, filmmakers, video editors, and anybody else who relies on correct color reproduction. They are often referred to be “gaming” monitors in the industry because they have faster responses than TN panels.

VA (Vertical Alignment) screen panels are a newer design that aims to blend the fast response time of TN with the more precise and bright colors of IPS. Many gaming monitors are now manufactured with VA panels, which have refresh rates as low as one millisecond in duration, despite the fact that it is a bit of a middle ground.

Note: For gamers who want a monitor that can catch pace with even the most demanding games, TN or VA screen panels are the best option. IPS gaming monitors are accessible, but they’re hard to come by and expensive, and they’re still slower than the competition. The panel type may usually be discovered in the monitor’s specs on the web page, or in the box if purchased in a store.

How to Check Response Time of Monitor?

On your device, go to the Settings menu. Then, in the drop-down menu, select or look for Digital Safety and Parental Controls. You’ll be able to see all of your current screen time all across your apps the instant you tap on it. Furthermore, if you press on the name of an app, you will be able to get a breakdown of how much time you have spent on it previously.

What Are the Cons of Having a Quick Response Time?

Gaming displays usually do away with more extensive image analysis that would otherwise get in the way of the data from the computer due to the requirement to lower response time.

Color-correcting parts of the monitor, improved brightness, blue light filters that alleviate eyestrain, and other related features are all examples of this.

When you choose a gaming monitor and set the response time to the shortest feasible, you will most likely notice a reduction in brightness and duller colors as a result of your decision.

What should you Look for in a Monitor with a Fast Response Time?

That’s not the case for a vast number of games. Even if you’re playing against a machine in single-player mode, the occasional blur or ghost image may not be worth the cosmetic cost of acquiring and tuning your gaming monitor to the quickest possible mode for your game. Even when played online, more casual games like Minecraft do not benefit from the relatively small visual lag.

If your multiplayer game’s connection is poor, the time taken your system to send and receive data from the game’s server is likely to be considerably longer than your response time. Whether you’re playing on a “slow” monitor with a reaction time of 10 milliseconds or a “fast” monitor with a response time of 100 milliseconds (one-tenth of a second), image delay won’t be a factor in your success.

If you play professional esports, possessing a faster response time is critical to staying on top of the game. Response time, on the other hand, may not be the most crucial factor to consider if you are a frequent user, such as for expert firms or casual internet browsing. To make your gaming more smooth and enjoyable, you need to invest in the right type of gaming monitor so that you don’t need to face any sort of problems like input lag or screen-tearing, etc. In a similar context, you can go for G-sync monitors, in order to avoid the problem from occurring in… Richard Tyler Blevins, aka, Ninja is one of the most influential Fortnite streamers, who loves playing different Battle Royale games to take down his opponents. The streamer has around 24 million subscribers on YouTube currently as he continues to entertain his audience either with Fortnite streams or with other gameplays. In case you wonder, what… 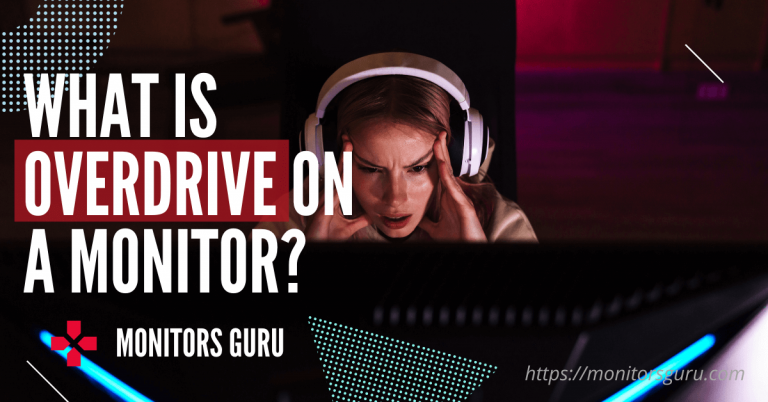 As a professional gamer, you would’ve noticed some sort of blurriness while playing fast-paced games even while using a 144Hz gaming monitor. Ever wondered why that happens? Well, it’s not because you are using a faulty monitor. It most probably happens due to low response settings on the monitor and this is where the term…