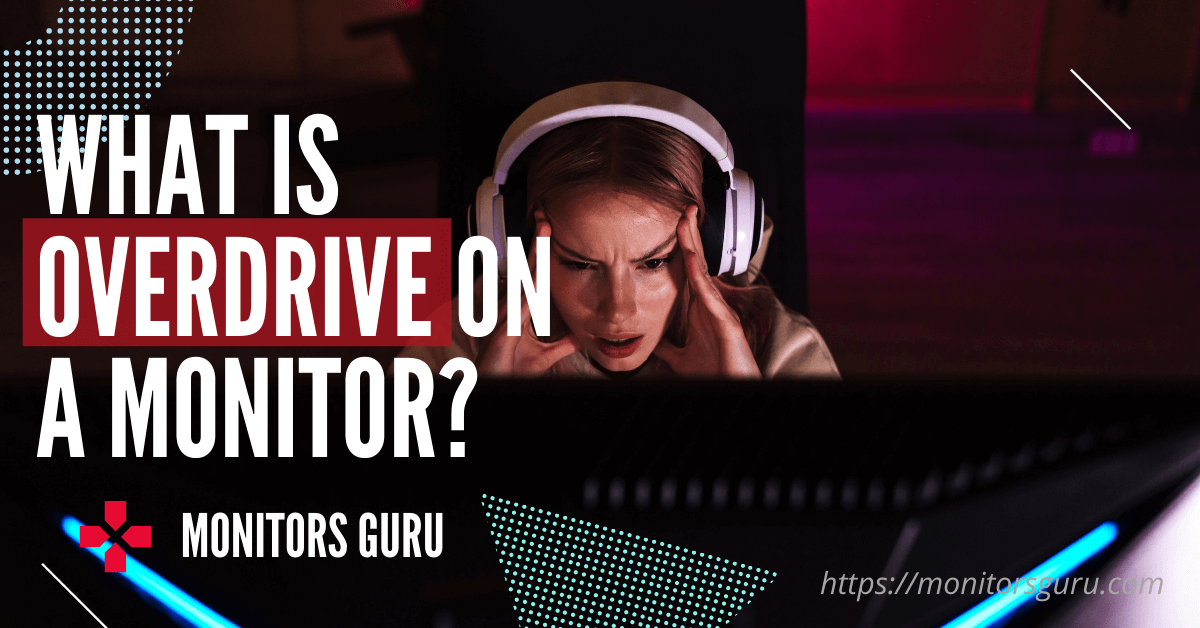 As a professional gamer, you would’ve noticed some sort of blurriness while playing fast-paced games even while using a 144Hz gaming monitor.

Ever wondered why that happens?

Well, it’s not because you are using a faulty monitor. It most probably happens due to low response settings on the monitor and this is where the term “Overdrive” kicks in.

The answer to what is overdrive on a monitor has a simple definition, “It means optimizing monitor’s response time to an extent that it eliminates the ghosting factor in a game”.

But, that’s not the end, as we are here to explore this topic in complete detail.

Have a look, without any further ado:

What is Overdrive on a Monitor and Why Does It Matter?

Overdrive is a term used for optimizing the response time of a gaming monitor.

That said, the optimization is done in such a way that it pushes the response rate time and reduces the overall trailing or ghosting effect while playing a game.

Besides, gamers will also see a drop in smearing with optimal overdrive settings during combat or racing games, etc.

Before we go deep into turning overdrive on or off for monitor, you need to understand the two main concepts, i.e.

Ghosting does not mean that your monitor acts like your crush and ghosts you off for a week. (Pun Intended)

In gaming community, ghosting refers to the blurred images that could happen on a monitor while playing titles like Fortnite or Forza Horizon, etc.

Now, the question that comes to mind here is that why ghosting happens?
Ghosting actually happens due to slow response time. Due to slow response rate of a gaming monitor, the previous image pixel takes time to change its color into next pixel when display changes its color to the new image.

In other words, you will face fragments of the old image on the new one.

When that happens, you will see smearing, blurriness, and trailing issues while playing highly optimized games.

This is what we call ghosting in simple words.

Heading towards explaining the next concept, i.e. Response Time as follows:

What is Response Time in a Gaming Monitor?

We already know that ghosting occurs due to slow response time, but what does it mean actually?

In simpler words, response time could be defined as the minimum time a pixel takes to change its color when the display refreshes with a new image.

In this aspect, response time is a crucial factor before you consider buying a display for your gaming rig.

Understand that the lower the response time, the faster its pixel changes the color. Hence, less chances of ghosting.

One other notable aspect while explaining response time is how it’s measured.

The response time of a monitor is judged in milliseconds and normally a gaming monitor from brands like ASUS, Acer, and Dell comes with a 1ms response time.

However, more than a brand, it depends upon the kind of panel installed in a display. Normally we see VA (Vertical Alignment), IPS (In-Plane Switching), and TN (Twisted Nematic) panels installed in gaming monitors.

Out of all those the TN panel offers the lowest response rate at around 1 to 1.2 milliseconds respectively.

One of the advertising tricks that many gaming monitor manufacturers play is that they add the 1ms response time quality in monitor’s specs.

In reality, however, the default response time of a monitor regardless of the panel installed in it is around 3 to 3.5 milliseconds.

Call it whatever you want, but this is where you have the option to overdrive your monitor to reduce the response time back to 1ms.

It will allow reducing the ghosting and smearing issues that you’ll face if you do not turn on the overdrive option.

How to Turn On Overdrive on a Gaming Monitor?

Locating the overdrive option might vary from monitor to monitor.

Not to forget, the term overdrive has many other names such as Response Overdrive, OD, or even Response Time Compensation.

First things first, you need to locate the overdrive adjustment settings and for that, you will need to open the OSD menu.

Apart from other settings, locate the Overdrive settings on your monitor and simply turn it on.

Some monitors will automatically reduce the response time after you turn on the overdrive option from OSD.

However, some latest models now also offer to adjust overdrive settings ranging from low to medium and high.

While overdriving the monitor is essential for playing games without ghosting, adjusting it on a high level could backfire. (We will discuss its disadvantages later)

What we recommend in this case is to keep the settings at a medium level. It will not only reduce ghosting and smearing, you will be able to play the games without facing any blurriness.

If you are using Asus monitors and have trouble with adjusting its settings you can check out our guide on Best Asus monitor Settings for gaming.

In some cases, yes. Overdriving your monitor to high settings can cause pixel overshooting, which could actually impact the overall display.

Pixel overshooting in other words means reverse ghosting and it could actually cause more issues rather than fixing the blurriness problem while gaming.

So, if your gaming monitor offers only On/Off overdrive option, then simply turn it on.

If it comes with adjusting the levels, keep it on medium to ensure a flawless gaming experience.

Final Takeaways: What is Overdrive on a Monitor?

Turning it on allows a monitor to offer the exact 1ms response time, which can remove blurriness from the graphical interface while playing fast-paced combat and racing games.

With that said, it’s recommended that you adjust the overdriving settings to medium level to avoid any overshoot/reverse ghosting problems.

Enough about that! Let us know whether you have seen improvement in the display after turning on the overdrive settings or not. We will use the data to improve this article in near future.